The latest Ebola clinical trial to be published showed that, at the dose given, the drug did not improve survival rates compared to historic controls. 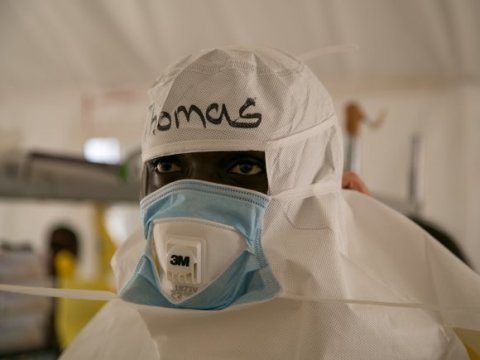 How and where to access Ebola trial data has been hotly debated since the beginning of the last major outbreak in 2013. This discussion topic has given rise to the Ebola virus disease (EVD) data platform - a centralised platform where researchers and clinicians can access data from clinical trials undertaken during the Ebola outbreak.

Published today in PLOS Medicine, the results from the Wellcome Trust funded trial of the experimental anti-Ebola virus drug - TKM-130803 - found that this drug candidate did not improve the survival of Ebola patients.

The treatment interferes with the production of two essential Ebola virus proteins and was seen to improve the survival outcome of monkeys experimentally infected with Ebola. When the treatment was then used to treat infected patients in the field, researchers used a new approach to generate early evidence of effectiveness or ineffectiveness.

Although the treatment proved to be unsuccessful in people, this method can be used as a tool to screen potential therapies and determine the need for further studies (including randomised controlled trials) during an epidemic. The approach meant that the study was quickly able to reach a pre-defined point to stop the trial. This data from the trial is now available to researchers by application to the Ebola Data Access Committee.

The study took place at the GOAL Ebola Treatment Centre in Port Loko, Sierra Leone between 11 March and 15 June 2015. Patients with laboratory-confirmed Ebola who volunteered to participate in the trial were given a once daily infusion of TKM-130803 for up to seven days. After 14 patients had received TKM-130803 the pre-specified statistical endpoint was reached and the trial was stopped. Out of twelve patients given TKM-130803 who survived the first 48 hours, nine died and three survived. However, most of the patients entering the Ebola Treatment Centre at the time the study was enrolling, which included those given TKM-130803, had very severe Ebola disease, so further studies are needed to assess if the drug might provide a benefit in patients with less severe disease.

Professor Peter Horby, Chief Investigator of the study, said: "Thanks to the tremendous efforts of everyone involved we now have a much clearer picture of the potential of this drug. We are obviously disappointed that it does not seem to offer a benefit to patients with severe Ebola but it remains to be seen if the drug will help those with less severe illness. The drug was well tolerated by all of the patients and we’ve learnt a lot about giving the drug to patients with Ebola. Once we get the results of on-going tests of the drug concentration in the patients’ blood we will have a better understanding of the optimal dose for any further studies."

This trial was undertaken by researchers from the University of Oxford and Sierra Leone, working in partnership with humanatarian organisation, GOAL Global, and the World Health Organization, as well as many other collaborators.

If you are interested in accessing this data, please refer to our data access information or email Jennifer O'Callaghan at the Wellcome Trust.