An IDDO/WWARN study has found that primaquine is not associated with increased levels of anaemia following treatment of patients without G6PD deficiency for P. vivax malaria and should be used as part of a radical cure. In the largest study of its kind to date, researchers carried out a systematic review and individual patient data meta-analysis which involved 3,421 patients in 29 studies published in BMC Medicine. 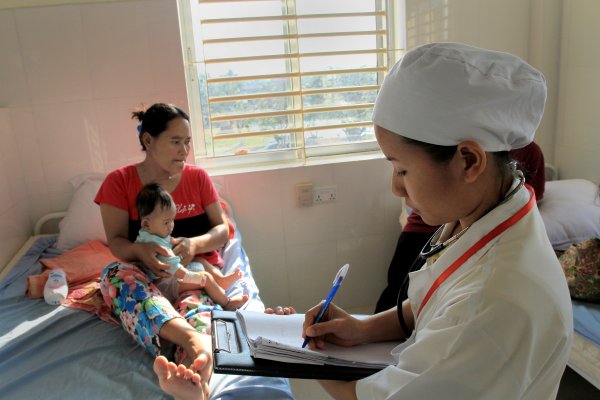 Plasmodium vivax affects 10 million people each year. It has the ability to form dormant stages in the liver that can recur weeks to months after the initial infection. These relapsing infections can worsen anaemia, one of the major causes of morbidity from P. vivax. Anaemia is caused by destruction of both infected and uninfected red blood cells and the reduced production of red blood cells.

Curing both the active blood stage and dormant liver stage of the infection is crucial to eliminate parasites from the body, prevent relapses, and reduce the risk of anaemia. Primaquine is the only widely available drug that can act against the dormant liver stages of the parasite infection. However, primaquine is not widely used in many endemic regions across the world, due to concerns about the risk of the drug causing severe anaemia in patients with the pre-existing genetic condition glucose-6-phosphate dehydrogenase (G6PD) deficiency. Individuals with G6PD deficiency lack the enzyme G6PD, which causes red blood cells to break down more easily when they are exposed to certain stressors.

The extent to which the infection itself and primaquine treatment leads to loss of red blood cells in vivax malaria is not well defined. In this study, scientists conducted a systematic review and individual patient data meta-analysis of the existing literature to determine the degree of red blood cell reduction and therefore anaemia linked to primaquine. Studies were included from the majority of geographical areas where vivax malaria is endemic, including the Asia-Pacific, the horn of Africa and the Americas.

In a population of 3,421 patients from 29 studies with predominantly normal or presumed normal G6PD activity, scientists compared the degree of red blood cell reduction following treatment with chloroquine – the standard treatment – to chloroquine and primaquine co-administration. The meta-analysis found that other than that attributable to the malaria infection itself, patients treated with primaquine showed no additional reduction in red blood cells compared to those treated with chloroquine alone. Importantly, patients treated with primaquine then had an improved haemoglobin by day 42, likely reflecting successful treatment of relapsing liver stages and prevention of recurrent infections which lead to a reduction in haemoglobin.

First author on the study, Dr Rob Commons said: “Rather than worsening anaemia, we found that primaquine led to a reduction in anaemia. However, it is important to remember that this study reflects a population with normal G6PD activity and that G6PD testing should be undertaken before primaquine is given.”

The results highlight that the public health benefits of primaquine extend beyond the prevention of recurrent vivax malaria infection and lead to a reduction in anaemia. The next step for researchers will involve analysing the effect of multiple relapsing infections on the risk of anaemia.

This work was done as part of the WWARN Vivax Recurrence Study Group.