The Wellcome Trust, Malaria Atlas Project (MAP) and Sage Bionetworks have created a new prize for proposals to develop a new insight, tool, or health application using the malaria data held by MAP. 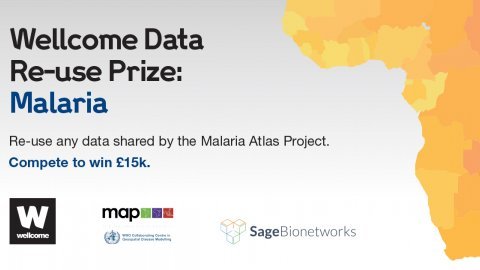 The Wellcome Trust, Malaria Atlas Project (MAP) and Sage Bionetworks have created a new prize for proposals to develop a new insight, tool, or health application using the malaria data held by MAP.

The Wellcome Data Re-Use Prize for Malaria comes as an open question. Participants are challenged to explore MAP’s data and come up with innovative uses or insights. Participants might combine MAP's data or modelled outputs with their own open datasets to address questions either directly associated with malaria or for which malaria might be a potential covariate.Submissions will take the form of a piece of code or analysis, plus a short narrative description of the work undertaken and how it meets the success criteria. The success criteria will include things like novelty, potential health impact, and robustness of methodology.

Read Details of the Challenge Question

Find out who has already applied to compete for the prize

Pete Gething, Head of the Malaria Atlas Project comments, “Understanding the geospatial and temporal distribution of malaria is vital to effectively targeting interventions to combat the disease. The estate of data and modelled burden estimates that MAP has built up is a key resource in informing that understanding. However, for every question we answer, our data and models throw up another. That’s why we are excited about the Wellcome Trust Data Re-use Prize: it provides an opportunity for a broad range of data-scientists and modellers to bring their perspective to our data and collectively provide insights we might not otherwise think of.”

Why was the prize created?

The World Health Organization (WHO) considers nearly half the world’s population at risk from Malaria, with an estimated 216 million new cases and 445,000 deaths in 2016, mostly in sub-Saharan Africa. But after decades of neglect, efforts to combat the disease have entered an unprecedented era - it is high on the policy agenda, and a growing body of evidence points towards important reductions in illness and death. The global effort to eradicate malaria depends on researchers and policymakers being able to access and use the data that is being generated about the disease and interventions to control it.

The Malaria Atlas Project launched its Repository of Open Access Data (MAP) resource in 2013, with support from a Wellcome Biomedical Resources grant, and then funding from the Bill & Melinda Gates Foundation. The repository contains a wealth of data on malaria risk and intervention coverage - all of which is free to be accessed, re-analysed and re-used by anyone. As part of its mission, MAP creates statistical models to estimate the true burden of malaria through time at a fine-scale resolution 5 km2 grids. Both parasite rate (prevalence) and clinical incidence rate (annual parasite index, or API) are modelled and mapped.