Assessing the effect of antimalarial medicines on the heart’s rhythm

Malaria is the leading cause of parasitic disease, killing nearly half a million people per year, most of whom are African children. Recent figures from the World Health Organization indicate that the decline in the number of infections and deaths annually has stalled. We are once again at a critical time where commitment and the co-ordinated use of all available tools to control malaria are essential to reversing this worrying trend. 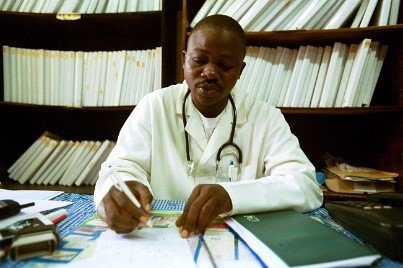 Antimalarial medicines can be lifesaving as part of the treatment of individual patients with malaria, but they are also a critical pillar for the control of disease at a population level, for example through use in Mass Drug Administration (MDA) strategies. Currently, the most important antimalarials are artemisinin combination therapies (ACTs). Although there is evidence that resistance to artemisinin derivatives is emerging and spreading across Southeast Asia, they remain a highly effective treatment against both uncomplicated and severe malaria infections.

The cardiovascular side effects of quinoline antimalarials

Antimalarials of the quinoline class have long been associated with cardiovascular side effects. Chloroquine and quinine, are both in this group, and have been used in vast quantities for over 50 years for malaria and other indications. They can cause a profound drop in blood pressure and affect the heart’s rhythm by prolonging the QT interval on the electrocardiogram (ECG), particularly when administered by rapid intravenous injection. QT prolongation is a risk factor for the development of ventricular tachycardia and Torsade de Pointes – both potentially fatal rhythm disturbances.

During the 1990s, halofantrine, another quinoline, was unequivocally associated with sudden cardiac death through marked prolongation of the QT interval following administration for the treatment of malaria. Since then, there have been several other quinoline antimalarials developed which have not clearly been associated with cardiovascular side effects, although concern about their cardiovascular safety profile persists.

A large-scale review of nine antimalarials

The WorldWide Antimalarial Resistance Network (WWARN) – which is part of IDDO – worked with partners at the Mahidol Oxford Tropical Medicine Research Unit (MORU) to publish a recent review in BMC Medicine that systematically assessed the cardiovascular side effect of the quinoline antimalarials. We included all published trials which included at least two ECGs recorded during drug administration for nine antimalarial medicines. 177 trials were published between 1982 and 2016, enrolling 35,548 participants of whom 18,436 underwent systematic ECG evaluation. The analysis reassuringly found there were no serious cardiovascular side effects recorded or reported in any of these trials. Our findings suggest that cardiovascular side effects of the quinoline antimalarials are very rare following the treatment of malaria.

However, the review highlights the lack of a standardised method of recording, analysing and reporting QT data in malaria clinical trials. A major limitation is the systematic error introduced during heart rate correction of the QT interval. Guidelines developed by the US FDA exist for the thorough investigation of the effect of a drug on the QT interval. In addition, a WWARN team developed a recent ECG guidance document specifically for malaria clinical trials. The aim of these guidelines is to encourage a more systematic and consistent approach to ECG and QT methodologies in malaria trials.

How could we strengthen our evidence base?

The fundamental problem is that the QT interval is neither a sensitive nor specific marker for serious rhythm abnormalities. Looking to the future, alternative methods for assessing a drug’s proarrhythmic risk are in development, such as the Comprehensive in vitro Proarrhythmia Assay (CiPA) which uses a mechanistic-based in vitro assessment of drug effects on multiple ion currents with a computational model of the human ventricular cardiomyocyte. Results from these pre-clinical studies would help to stratify cardiovascular risk when coupled with data obtained from early clinical trials.

We also need to analyse individual patient clinical trial data, particularly those collected as part of Mass Drug Administration trials, the participants of which generally represent a broader, more inclusive population. Furthermore, continued efforts to strengthen pharmacovigilance systems would enable us to detect rare and very rare adverse events in real-world, field-based settings, rather than focussing only on clinical trial populations.

This article first appeared on the BMC Medicine website blog and has been updated here.

Dr Ilsa Haeusler worked with the WorldWide Antimalarial Resistance Network (WWARN) and partners on this review. Ilsa is an academic clinician and holds an Academic Clinical Fellowship in Paediatrics at University College London’s Institute of Child Health. Her research interests include infectious diseases and global health.